Today is a good day as we have just received a great picture from Kirllos which was acquired by mega-d botnet.

Where is it from? According to email, it was borrowed from Gigabyte’s corporate network. 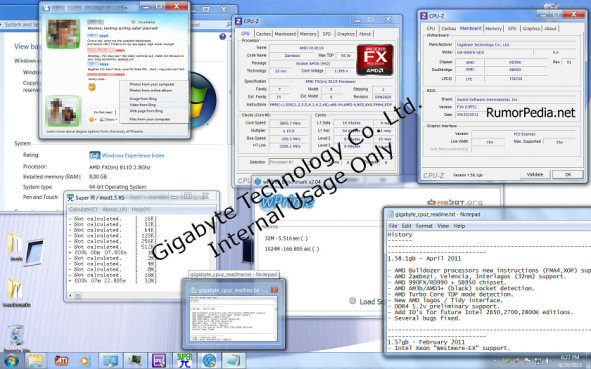 According to the Gigabyte CPUZ History:

Oh, it also has some benchmark numbers for you to check out.

As always, info is not confirmed by us and take it with a grain of salt.

Nevertheless, we thank Kirllos for the information!

It has few screenshtos merged together, hence the active windows.
MSN Chat talks about updated BIOS version which should fix readings.
DDR4 support changelog is not for AMD Bulldozer.

We have been contacted by GIGABYTE and they confirmed that the chat conversation and all the details are fake.

On the other hand, who in the sane mind would say: yes, of course it’s real. We leave this for You to decide. Fake or real?